Surachet Kongcheep, marketing research and positioning director, said the project was a joint venture with Siri Grand Property Co, one of SET-listed developer Nusasiri Plc's subsidiaries, with a 49-51 ownership ratio.

"We will offer a leasehold contract of 30 years for foreign buyers," he said. "Units will range from the middle to higher-end segment with prices starting from 5 to 25 million baht."

Scheduled to launch in July, Lake Serene Rama II, formerly Nusasiri City Rama II, will be located on a 193-rai plot on Rama II Road in Bangkok and Samut Sakhon, a potential location with two expressways.

Last weekend the company launched presales of the first project, Artisan Ratchada, worth 6 billion baht, and recorded 40% of units sold. It expects to be sold out within one year, Mr Surachet said.

The project will be located on an 8.2-rai site on Thiem Ruam Mit and Pracha Uthit roads, being a mixed-use development of residential and retail spaces. It will comprise four buildings with a total of 1,337 units sized 28-78 square metres and priced from 90,000 baht per sq m.

"Two-thirds of buyers were foreigners, mainly from Hong Kong, China and Singapore. They wanted to buy a condominium unit in Bangkok as an investment and for residence," he said.

It is a joint venture with SET-listed industrial estate developer Thai Factory Development Plc, which acquired it from Sunshine City Co. Sunshine City faced a financial crisis in 1997 and suspended construction from the sixth floor of 34 planned storeys.

"We are exploring new opportunities and talking with potential partners to develop projects in Bangkok and the provinces," said Mr Surachet.

"In the first few years, we will mainly focus on Bangkok condominiums in the mid-priced segment of over 100,000 baht per sq m."

Risland has invested in many overseas countries such as the US, UK, Australia, New Zealand, Indonesia and India. 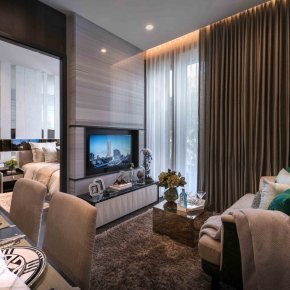